Rick Warren, His Detractors, and the Body of Christ

The news that Rick Warren‘s son had passed away by suicide will undoubtably continue to be international news for some time, because the combination of tragedy and celebrity tends to be so tantalizing in our culture. Not that that’s healthy, but there isn’t much I can do about it. I did notice one oddly uplifting trend as the news spread… and I say “oddly” because it came from social media, which basically draws its dark life-force from vitriol, ignorance, and hate.

Among Warren’s many critics from within the Christian world (and any supremely public figure within Christianity will, by definition, draw a zillion critics), I have yet to find one that does not consist of pure grace and empathy. I’m sure there are exceptions, but I’ve yet to find one (Westboro, I’m looking in your direction).

And there is a special beauty in that observation. Ever since the advent of Christianity, even in the months following Pentecost, disagreement and dissent has been a mark of Christian life. Dissent, regardless of appearance, is not a sign of weakness, but, rather, it indicates strength. Whenever an organization exists without any conflict, it is reasonable to assume that something unhealthy and dangerous lies beneath its surface.

In the wake of tragedy, we put aside the differences, theological disagreements, frustrations, jealousies (the guy sold, like, a billion books), and squabbles, to come together to offer support for the Warren family in the unifying center of who we are: Jesus. And if I know anything about Jesus, he does not shy away from tragedy, loss, and suffering. Actually, that is sort of his thing…

Empiricism, Truth, and My Response to Jonathan.

An intrepid reader, Jonathan, had a great comment on my last post about that guy offering $10,000 to ‘prove’ a particular way of reading the creation narratives in Genesis. It’s important to point out that by ‘intrepid reader,’ I mean ‘one of my oldest friends from high school and college, who was also in my wedding.’ Calling Jonathan a ‘reader’ is like saying my mom is a huge fan of my music: it might be true, but it also masks reality.

That said, here is his comment (reposted without his permission):

Iâ€™ve thought a lot recently about this, and how hard it is to disabuse ourselves of post-enlightenment thinking. Science is so very good at what it does, that we seem incapable of seeing truth as anything other than empiricism. And really, thatâ€™s a shame. Because trying to reconcile empiricism is a losing battle (and frankly, a waste of time much better spent).

I thought this deserved a direct response because I think he is absolutely correct. The scientific methodÂ excels at what it does: studying repeatable events. I am living proof of the effectiveness of science, as without it, I would have died of leukemia in early to mid 2006 (dx’ed Oct 2005). But when we equate ‘truth’ and ‘science,’ we have a problem.Â Indiana Jones, in “The Last Crusade,” put this clearly: Science is the search for fact. If you want truth, go to the philosophy department. 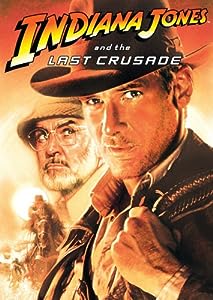 The reason why this confusion between fact and truth is problematic is that 99.9% of my existence and experience consists of non-repeatable events. If we limit truth to empiricism, as Jonathan warned, we unwittingly dismiss most of the human experience, and the things that make us human – the arts, aesthetics, relationships – get implicitly marginalized and dismissed as fluffy bits that really aren’t important.

Ironically, assuming that science is the fount of all truth ends up dehumanizing us.

I don’t know…what do you think? Thereâ€™s that word againâ€¦â€literal.â€ While I am not qualified to talk about science with any authority, IÂ canÂ talk about the Bible. And I cringe every time someone uses the word â€œliteralâ€ to describe the way they interpret a set of documents that areÂ at minimumÂ 2,000 years old (quite a bit more than that for Genesis, as it were).

When we start using words like â€œliteral,â€ â€œmetaphorical,â€ or â€œallegorical,â€ we are unwittingly imposing modern categories on ancient texts. Ancient writers simply didnâ€™t think in those terms, and herein lies my biggest concern: when we assume the Bible possesses a modern, post-Enlightenment worldview, we inevitably force the texts to say things they never intended. And that’s a problem.

We can see thatÂ Joseph Mastropaolo is making this exact mistake because he is seeking to argue that Genesis 1 (the creation narrative of 6 days) is the most â€œscientificâ€ explanation of origins. But assuming that Genesis 1, along with the rest of the Bible, made sense in its original, ancient context, why would we want to apply a thoroughly modern category like â€œscientificâ€ to something that came to its final formÂ wellÂ before even theÂ pre-modernÂ era?

People donâ€™t read the Bible for instruction in anatomy and physiology (e.g., they believed our thoughts came from our intestines) or geography (they thought the Earth was a disc or â€œchugâ€), so why do we assume that the Bible is fine for other scientific questions?

This isn’t an attack on the Biblical Narrative (as anyone who knows me will attest, I take it very, very seriously), but itÂ is a short plea to stop and evaluate what the Bible is and isn’t trying to tell us.

Ultimately, I think we have lost our ability to read these ancient writings with historical empathy. In our narcissistic minds, we assume that the ancient writers perceived and talked about reality much in the same way as we do today. This couldnâ€™t be further from the truth, and it doesnâ€™t take much effort to see it â€“ though we must be willing to look.

If this peaks your interest, I will be co-hosting a seminar on faith and science at Redeemer Lutheran Church on April 14th, 6:30pm. We will look at some of these issues in much more depthâ€¦ but there won’t be any $10,000 prizes, unless you are feeling generous.

It appears they’ve announced that they will be protesting Sandy Hook Elementary. I can’t say I’m surprised.

What actually surprises me, however, is that they still appear to be operating under the assumption that someone still takes them seriously. In 2007 they were labeled “The Most Hated Family in America” in a documentary done by the BBC withÂ Â Louis Theroux. It’s a great show, by the way – I highly recommend it. I remember watching the national media’s reaction to this wonderfully dysfunctional family,Â specificallyÂ noticing how any anger directed towards them simply fed the group’s narcissisticÂ sociopathyÂ (I’m not sure if that’s a real thing, but it fits). But honestly? I say pity them as you wouldÂ the kid that starts fights in school because no one believes he really is Batman. Stop taking them seriously, stop allowing yourself to get angry, stop complaining about them. They feed off negative emotion like I feed off bacon: every chance they get.

Start treating them as they really are: deluded, sad, angry people who have no capacity for self evaluation. It is widely acknowledged that the patriarch, Fred Phelps, is a mentally ill, abusive,Â megalomaniacÂ that keeps his little family in line by means of fear. That’s a hard way to live, both for him and his family.

While I have been pretty snarky during this brief post, what I am about to say is intended to be extremely serious (so please don’t send me any hate mail): Listening to( and reading) the rants by their leader, Fred Phelps, it is fairly clear that he suffers from at least a personality disorder and quite possibly other significant mental health issues. I find it deeply ironic and unsettling that they will be demonstrating in the wake of an event that will hopefully bring mental health awareness/issues to the national conversation.

Genesis 1 and the Questions of Culture

Before we get into that, itâ€™s probably a good idea to talk about method, because for most readers of the Bible, using Genesis 1 to talk about functions and functionaries may seem weird. For a more in-depth discussion of these topics, I recommend John Waltonâ€™s â€œThe Lost World of Genesis 1.â€ Much of what I say is in dialog with his work, and some of it is just plainly stolen from him. Seriously, itâ€™s a great book.

Questions about origins dominate the way we read the Biblical creation narratives, which is no surprise. Unfortunately, we often forget to consider what kind of questions we should be asking because it seems quite obvious to us that discussion of the origins of the earth and humanity ought to be concerned with scientific and material concepts: nuclear chemistry, orbital physics, chemical compositions, distances, and age. In a post-Enlightenment (and scientific) world, these are the things that we concern ourselves with when we ask, â€œWhere did we come from, and how did this all get here?â€

In fact, it is very, very difficult to imagine doing it any other way. But for most of history, humans have not conceived of the earthâ€™s origins in these terms. Our preoccupation with materials is a modern thing. Ancient cultures saw the world in very different ways.

That is not to say that they were â€œprimitiveâ€ or â€œdumb.â€ Wellâ€¦ they were just as dumb as we are today. But rather than a scientific explanation for the origins of the earth, many ancient cultures, especially the Ancient Near East, sought to understand the world in terms of its function and meaning. They accomplished this by using myths – narratives that offer an explanation. These myths described what it meant to be human, why the earth was created, and how it was created through divine activity. Far from being primitive, these narratives are often quite brilliant, complex, and contain tremendous insight into the human experience. They are still read today for this reason.

But they are not scientific accounts, and bringing scientific questions to these texts, including the Bible, fails to understand the cultures in which they were written. Iâ€™ll have to get to the functionaries next time because this post is already getting too long, but suffice it to say that the Biblical accounts of origin, the creation narratives of Genesis 1-3, occupy an ancient worldview that has no preoccupation with the materials of creation. As with my previous post, it is interested in how the elements of the universe functioned in an ordered system and how these elements gained meaning when they worked together to support/sustain human life.

Theologically, this means that God is perfectly happy to enter into human weakness (and culture) in order to reveal himself. All communication is governed by culture, and God revealing himself to humanity is no different. Even using the pronoun â€œheâ€ in reference to God illustrates this point. So when God was answering the questions ofÂ  â€˜who we are and how did all this get here,â€™ he did so in a way that made sense to the Israelite culture.

If you would like a more in-depth look, I highly recommend the book by John Walton:Â

Theme by Anders Noren — Up ↑